Gods of Trains and Timetables

It Began with Fridays for Future

I was planning a trip from Stockholm to England to conduct a couple of interviews for the Campfire Stories podcast summer series. And I’d done the math: traveling by train would cost three times as much as flying, and it would take 2 days as opposed to 2 hours. Each way. So I’d decided it would have to be the plane.

But then there was Greta Thunberg. And the Fridays for Future demonstrations. You know, where school kids go on strike to alert adults to the fact that … well, to the fact that WHAT THE F%*H$X# ARE WE DOING WITH THE PLANET!?!?!

I was reading an article about this and, along with the text, was an image that caught my eye, of a young boy holding a sign saying: “Grown ups! Why do you still fly when our planet’s on fire?”. And I knew that sign was aimed at me. 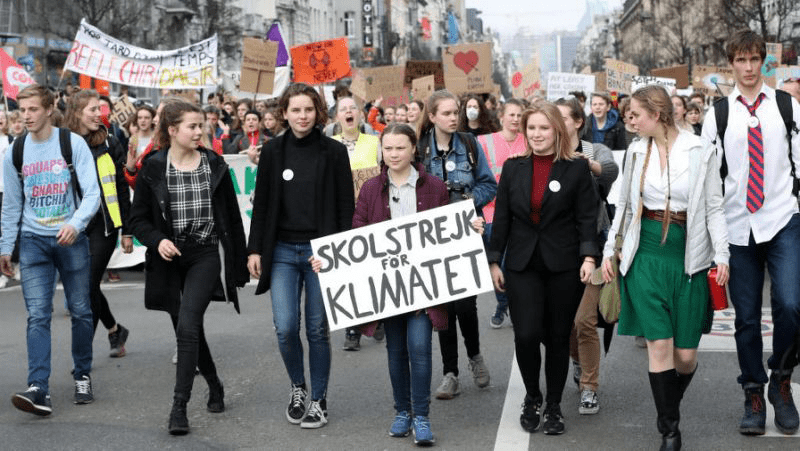 Interrailing it is, then

And, so, my plans had to change, and they did. Fastforward a couple of weeks and there I was, interrailpass in hand, now at the mercy of the Gods of Trains and Timetables. I was making my way – via Copenhagen, Hamburg, Basel and Paris – to London, then on to Portsmouth, Brighton and Totnes, before turning around a few days later, reversing the whole circus.

Travelling by train allows you to feel the travel – not just skim the top of it. It slows down time. And makes you realise that there are no guarantees or certainties in life. At all.

Oh, don’t get me wrong: air travel will do that to you too from time to time. But when you’re traveling by train, bus, ferry and train again, for two days across five countries, with six connections to make – some of them frankly a bit too tight for comfort – you’re feeling it alright. It’s in your face. 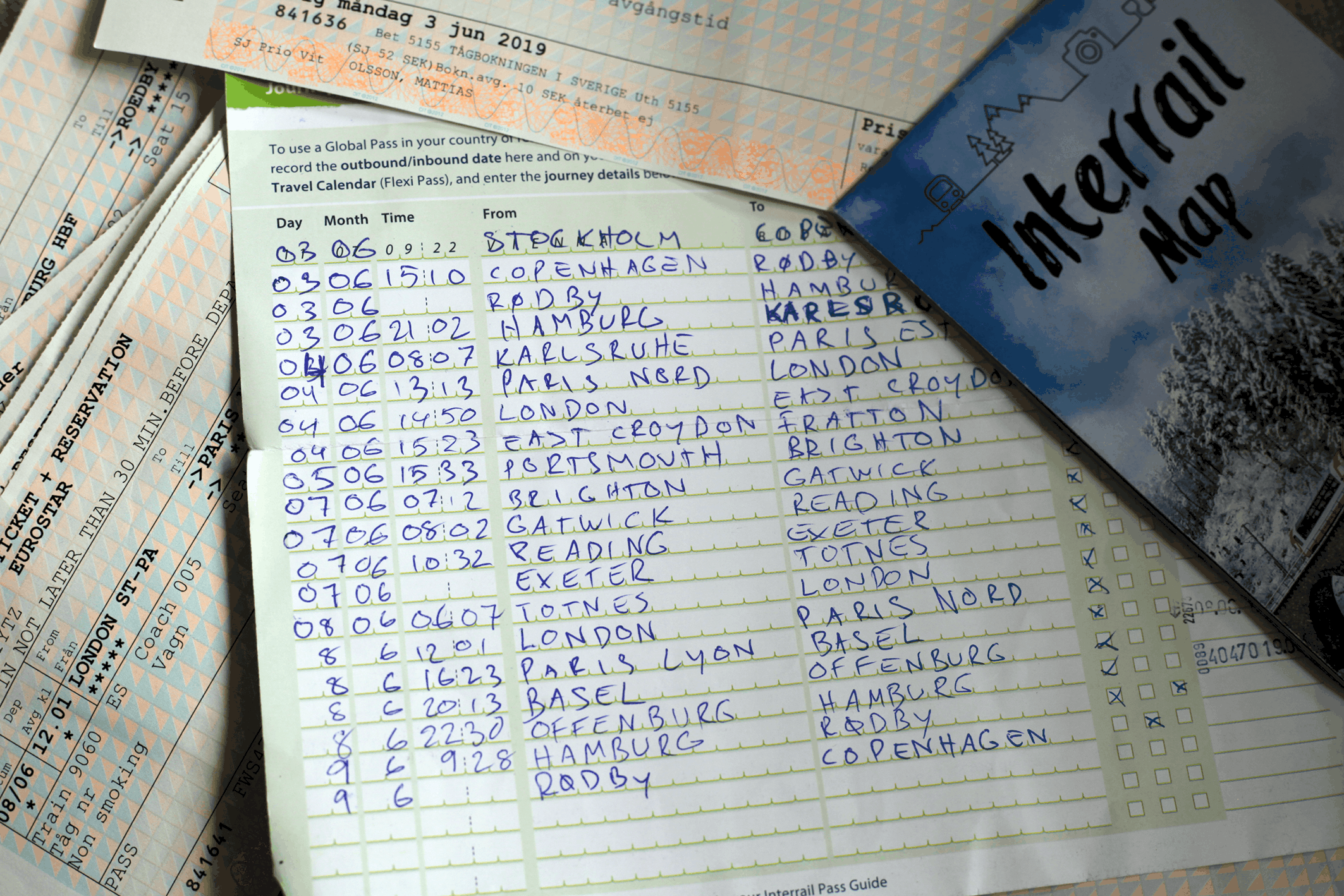 Moving ahead, one connection at a time

The first delay ocurred on the very first leg of the trip, and it was due to grass fires near the tracks. The second one happened on the second leg – this time I was on a replacement bus because of track construction, and it got delayed because of an accident on the highway. Suddenly it was a proper nail biter whether I was going to make the connection for my night train in Hamburg.

While I was busy being consumed by the dread of how to proceed if I missed the next train, the God of Borders and Uniformed Officials decided to show me a glimpse of my priviledge, contrasted by an example of the deep unfairness others have to live through in this world. This is what happened:

Two sour-faced police officers entered the train to check people’s passports. They didn’t though. Instead they just surveyed the passengers and proceeded to go straight up to two young men who appeared to be from Afghanistan or thereabouts. “What is your reason for coming to Germany?” they inquired, their tone an accusation right out of the gate. After a few minutes it was decided that they’d need to get off at the next station for further interrogation.

Was this my moment of glory, you ask? Did I stand up and address the police officers? Did I extend my humanness in the direction of my travelling companions? Maybe something like this: “Excuse me police officers. I know you are just doing your job. And I know it’s one that asks a lot of you. But will you please just for a moment consider what it must be like for these two men to travel through Europe in these times? To always be questioned and mistrusted. To possibly have left family and friends behind and be alone in this world. To not have a home to return to. Or a new country to feel welcome in. Regardless of whether they have the required paperwork or not, just contemplate for a moment what this very situation must feel like for them.”

I wish I’d said something like that. Instead I was murmuring some less eloquent version of the above, my knuckles white. But I did not speak. I’m ashamed to admit it, but that’s how it went. And soon the boys were excused from the train and I was back to worrying about my connection which, by the way, I made with a 10-minute margin.

The ups and downs continue

Cut to the next scene. The charachters are: two loudly laughing German women in their fifties and a British adventuring-type couple and me. We’re sqeezed into this tiny six bed sleeping wagon heading out of Hamburg, sharing stories and drinking wine out of plastic cups. My cheeks ablaze with contentment, bordeaux and a good measure of shame lingering from the prior scene.

After six hours of du-dunk, du-dunk, and a little bit of sleep, followed by a coffee and two brötchen with jam awkwardly consumed in the bunk bed, I was now standing on the platform having just stepped off the train. It was 5 am and I was in a place called Karlsruhe, where I was to change trains. A bit further away was a man who’d ducked out for a quick smoke. At first he was on the step of the train, but soon got braver and took a small, but fateful, step onto the platform.

It was but a few seconds after that step that the door behind him silently slid closed, then made this noise: “Lock!”. Now, that’s not a sound you’re hoping for when you’ve just taken a step onto the platform from a train you’re hoping to continue your journey on. The panic rose in his eyes. It was a slow-motion accident that had already happened. The train started moving, very gently. Almost friendly like. The man started walking with the train, his hand on the window like a plea.

All of this man’s gear was on that train, which now had sped up, rolling off all punctual and proud into the southern German sunrise. His passport. His bag. Possibly his girlfriend or child. This man’s fate, of which I know nothing, stayed with me for the rest of the trip, and still does to this day. 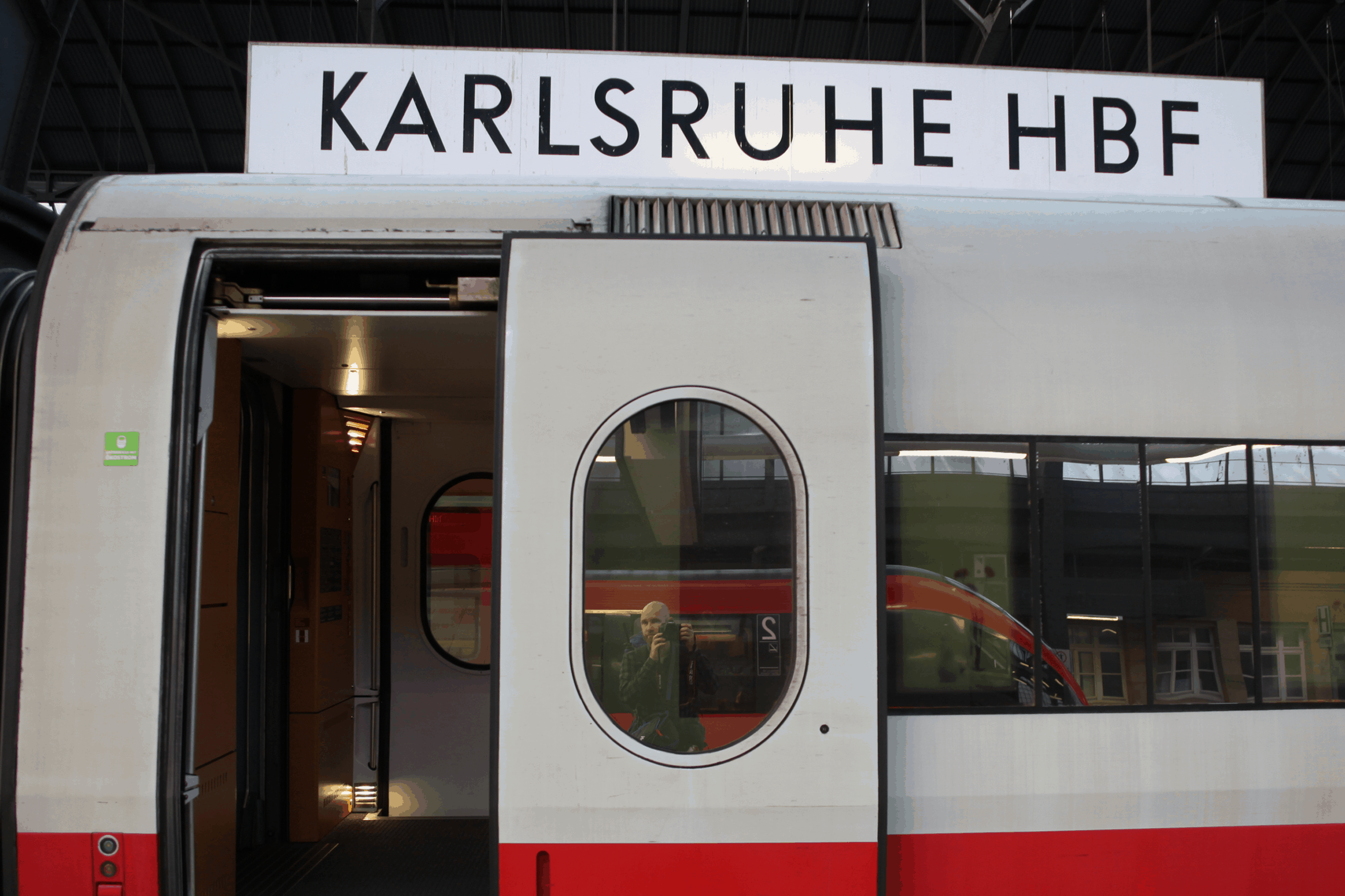 Acknowledging Those In Charge

It seems to me there is such a thing as Gods of Trains and Timetables. And if you’re an interrail traveller you need to acknowledge them, or there’s no telling what might be unleashed upon you. A proper prayer to this particular Deity does not go: “please make the train be on time” or “please make me not miss the next connection.”

A proper prayer, I believe, goes something like this: “Dear Gods of Trains and Timetables. I see you and I bow to you. I do not pretend to know what you have in mind for me on this particular day of travel. But I thank you for setting the stage and for animating all of its machinery and actors. And I will faithfully comply with the role you cast me in today. Amen.”

To hear the podcast “On Death and Dying (On Life and Living)” with Stephen Jenkinson that was the reason and result of this journey, click here.

To hear the podcast “What is the Transition Movement?” with Rob Hopkins, which was the second reason and result of the trip, click here.